By CLARE ANSBERRY And KRIS MAHER

It could have been the ultimate caper. Two men steal a bridge in broad daylight about 60 miles northeast of Pittsburgh and take it to a large local scrap dealer, anticipating a nice payout for their efforts.

But instead, they get a little over $5,100 for 15.5 tons of steel, apparently unaware that demand for steel has dropped, affecting the price of everything needed to make the metal from metallurgical coal to iron ore to scrap steel.

The men who were allegedly involved, brothers Benjamin Jones, 24 years old, and Alexander Jones, 25, both of New Castle, Pa., may now face jail time. They were arrested and charged with felonies, including criminal mischief, theft, receiving stolen property and conspiracy. The two remain in jail, awaiting a hearing on Thursday, and couldn’t be reached for comment. 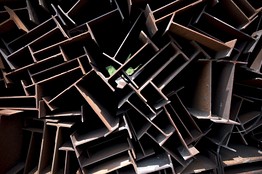 Bloomberg NewsSteel beams are stacked outside a scrap company in Pennsylvania.

“They saw it as an opportunity to make money,” says State Trooper Randolph Guy. “But that’s not much money for the work they did.”

The thieves apparently used a blowtorch to dismantle the bridge, which was in a remote wooded area, between Sept. 27 and early October. Then they carted the pieces during multiple trips in a pickup truck and, on one occasion, a trailer. Mr. Guy says they sold the pieces to a local recycler, who then heard reports of a bridge theft and notified police.

Josh Spoores, an analyst at Cleveland-based market analysis firm Steel Reality, says prices have fallen in recent weeks to about $445 a ton for shredded scrap steel—a premium product compared with big unprocessed bridge parts—from their high this year of $477 a ton in January. “The opportunists out there missed their mark,” Mr. Spoores says.

Gary Bruce, a spokesman for New Castle Development, which owned the bridge, says the structure was about 70 years old and served as a back entrance to a small industrial park. When notified by a nearby resident that the bridge, which was rarely used, was missing, he says he thought it had been washed away in a flash flood.

But when he went to check, he discovered torch marks, indicating that thieves had used a blow torch to dismantle the bridge. He reported the theft to local police, who turned the case over to the state police.

Mr. Bruce estimates it will cost the company about $100,000 to replace the bridge. “We found out bridges are exempt from our insurance coverage,” he says.

Read the article on WSJ.com